LEOŠ KRATOCHVÍL: TO ELBRUS ACROSS AN ICE WALL #4

Rest day. Lying in the bed, relaxing, only slight movement. We could barely walk; our feet were done for. At 10 A.M., we went to the pub to have some trout. The route went along the river, partly on a road, then through the forest. Beautiful. After lunch, we continued to Cheget. We had a traditional stop at the Narzan mineral water source. I took the whole bottle. We needed to withdraw some money, arrange a new entry permit and report our stay in the mountains to the Mountain Rescue Service because we had agreed to go up again. A second attempt. We also planned to climb Mount Nakra. However, despite another promise, we did not get the entry permit. This was because it lies on the border with Georgia and you need a special border permit.
We had to wait for Internet connection which had failed in the whole Cheget and in the surrounding villages in order to withdraw money from the ATM. Unfortunately, these only worked online. The only ATM that worked offline didn't have money. We had to wait very pleasant 2 hours in a pub with a terrace just above the Cheget marketplace. We had a pizza. Everything turned out well in the end. We took a taxi to the camp. It was cheap. Taxis are often a great adventure for a few minutes. There were cows walking on the roads, the evening was slowly coming. It was peace and quiet. Then a dinner and gathering strength for the next day. The weather forecast said it was going to rain. I wondered what the next day would look like.

It rained until 6 A.M., then the clouds broke, it stopped raining and it was partly cloudy. We waited for the forecast storm that was supposed to be very strong. The weather service kept postponing it; in the end, it was until 1 P.M. We had our rucksacks at the ready. In the afternoon, we set off to Irikchat.
Well, there it was again, up the hill one more time. Thanks to our previous failure we had quite decent acclimatization and even though we were hiking with heavy rucksacks, we bivouacked about 1.5 hours below the Irikchat gap. The rains had missed us, the weather was beautiful and it was cold. Before the last ascent to the gap, we met the 2 climbers whom we had met during our quick descent 3 days before. One of them was 50, the other about 75. We nicknamed the older one "Magic grandpa." He was great. He gave us a bag with dried fruit, nuts and a few candies. I asked them whether they had reached the summit. They hadn't as there had been a whirlwind. We wished all the best to each other, good luck during the ascent and descent. It was an interesting moment, a brief reflection of how people of the same age perceive life. Given the guy's age, it was very contrasting. A bored pensioner sitting at a heater versus an energetic pensioner who is full of life. Mainly the mental one. I had a feeling the bag of treats would serve me well later. 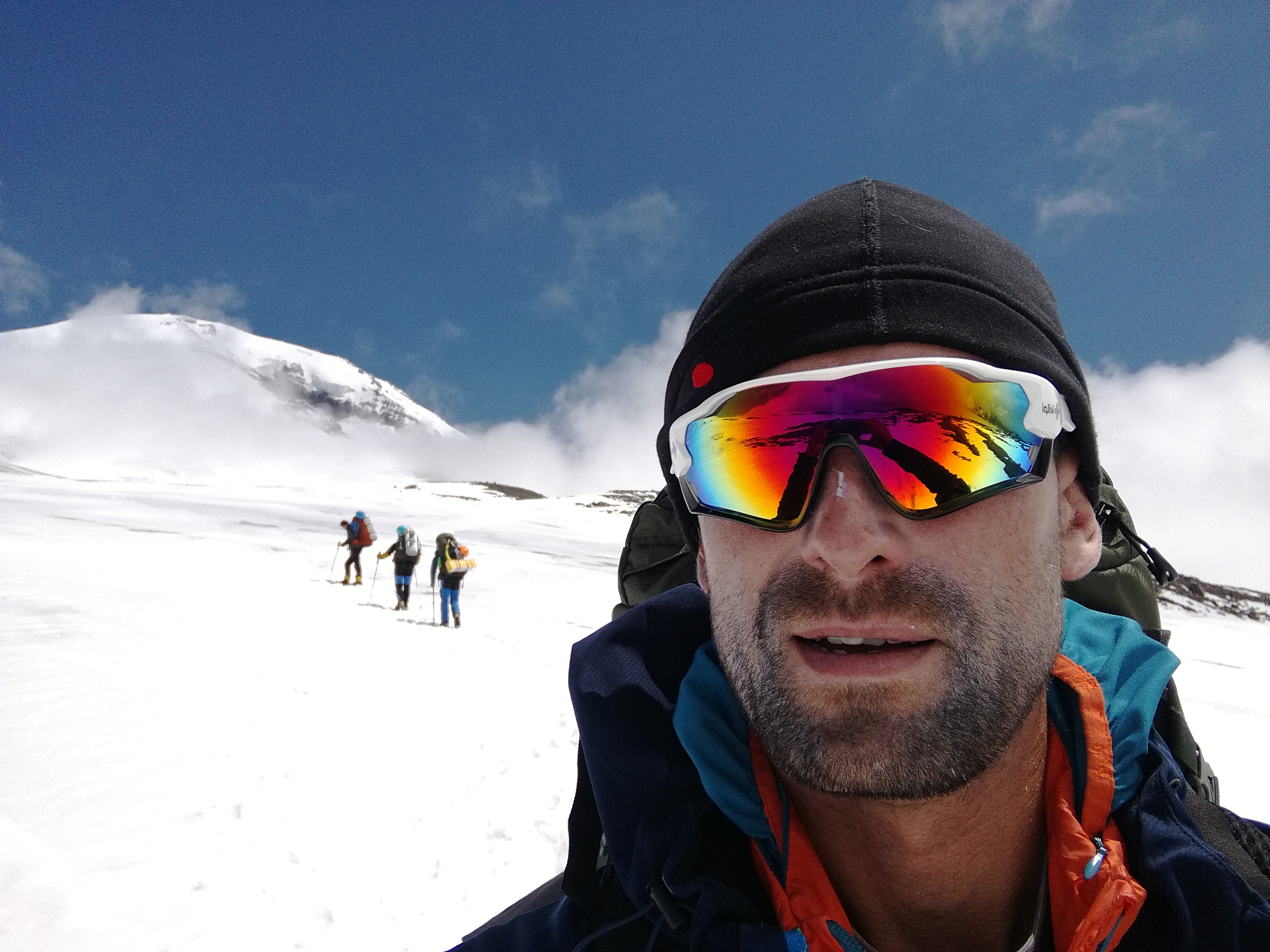 We climbed quickly, a steep ascent to the gap and then up to Irikchat. The glacier was already in front of us. It had changed a lot in the 3 days. One half was full of wet firn and the other was windswept to reveal the ice full of deep cracks. We opted for a trail across the snowfield. It was not a very good decision. Good 2.5 hours of walking over a minefield. Yuck. We were happy to see the lava field under our feet. Suddenly, we saw a man rushing towards us across the glacier. He asked about a group he had lost. Then he ran across the glacier to the other side. Ignorance is sweet. I expected him to disappear in a crack in the ice any time. Luckily, nothing happened. After a rest, we climbed to 4,500 m. We erected our tents, replenished water, ate something and went to sleep. The dark boulders of the lava flow were still warm. 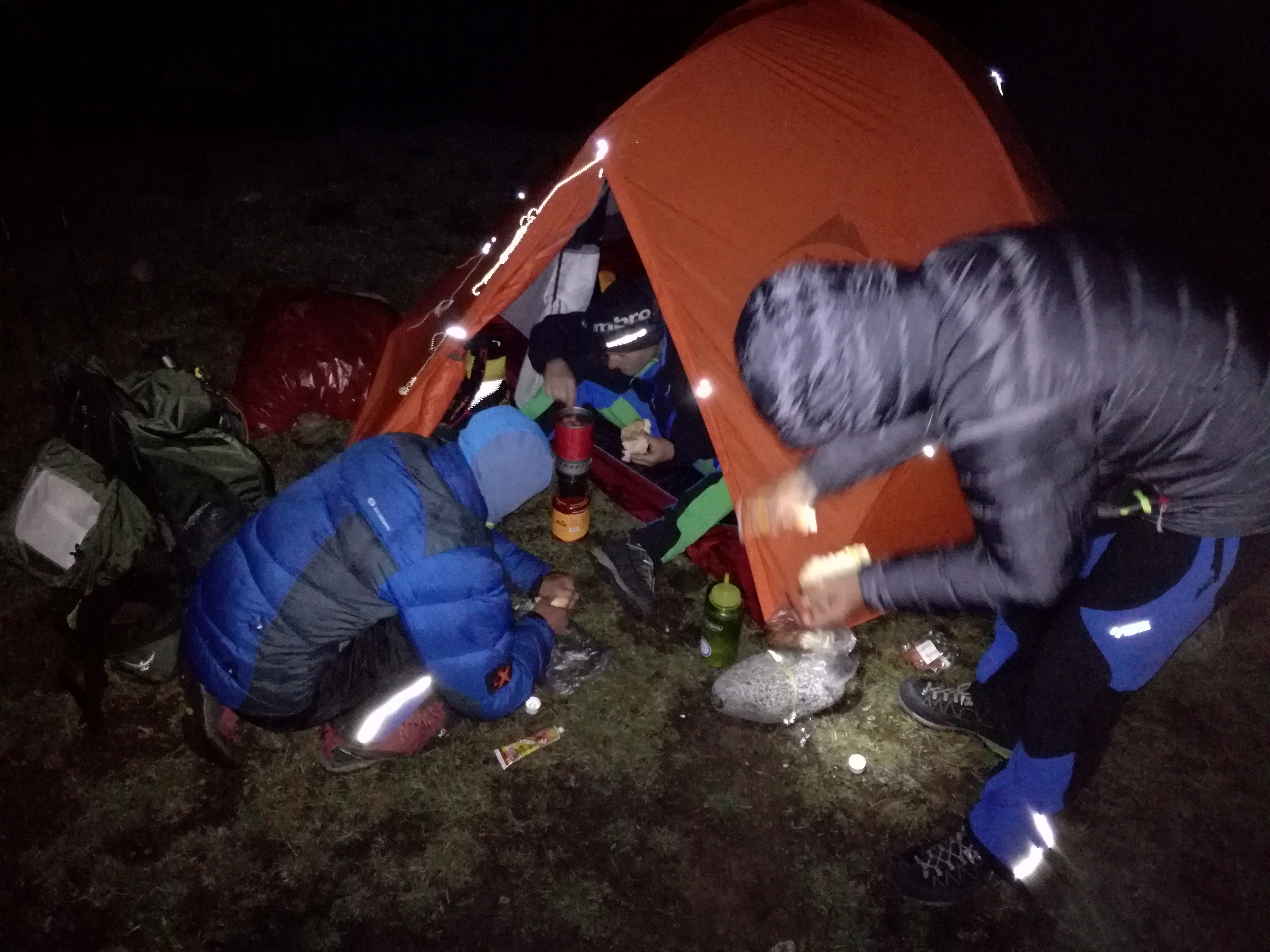 I forgot to mention an amazing thing. There were butterflies flying above the glacier. They were huge and there were a lot of them. Later, I found butterfly wings at the elevation of about 5,200 m. The tents were pleasantly warm, thanks to the hot stones. We closed the tent only after the sunset when the temperature fell below zero very quickly. There was just light wind, peace and quiet everywhere. Except for one tent down the lava flow, we were alone below the eastern summit. Nobody to be seen. The weather forecast was not good, or better, it was on the edge. The wind was supposed to get windier. We'd see. So far, so good.