LEOŠ KRATOCHVÍL: TO ELBRUS ACROSS AN ICE WALL #5

The sun was shining and it was warm in the morning. We could see the main ridge of the great Caucasus. On that day, we only had to climb 300 altitude meters to the last bivouac at the edge of the glacier. It was the highest lying one. We had breakfast, a lot of tea and liquid. We replenished our water for the hike, packed up our stuff and set off. I had to repack my rucksack, so I set off a bit later. My teammates had chosen the track on the right of the debris; I went to the left to see the whole crater. I passed two memorials on the way. One for a particular person and one for everyone who had never come back home from Elbrus. The higher I was, the stronger and colder the wind on the edge of the debris. The edge of the glacier was full of huge and deep cracks. There was the trail to Pastukhov Rocks but it was dangerous and it was necessary to go very early. It was fine to have a look at its whole stretch. We went directly upwards, though. Shortly after midday, we arrived at the snow and ice line. There was only the glacier around us but the lava flow debris reached quite high, roughly to the elevation of 4,700 m. 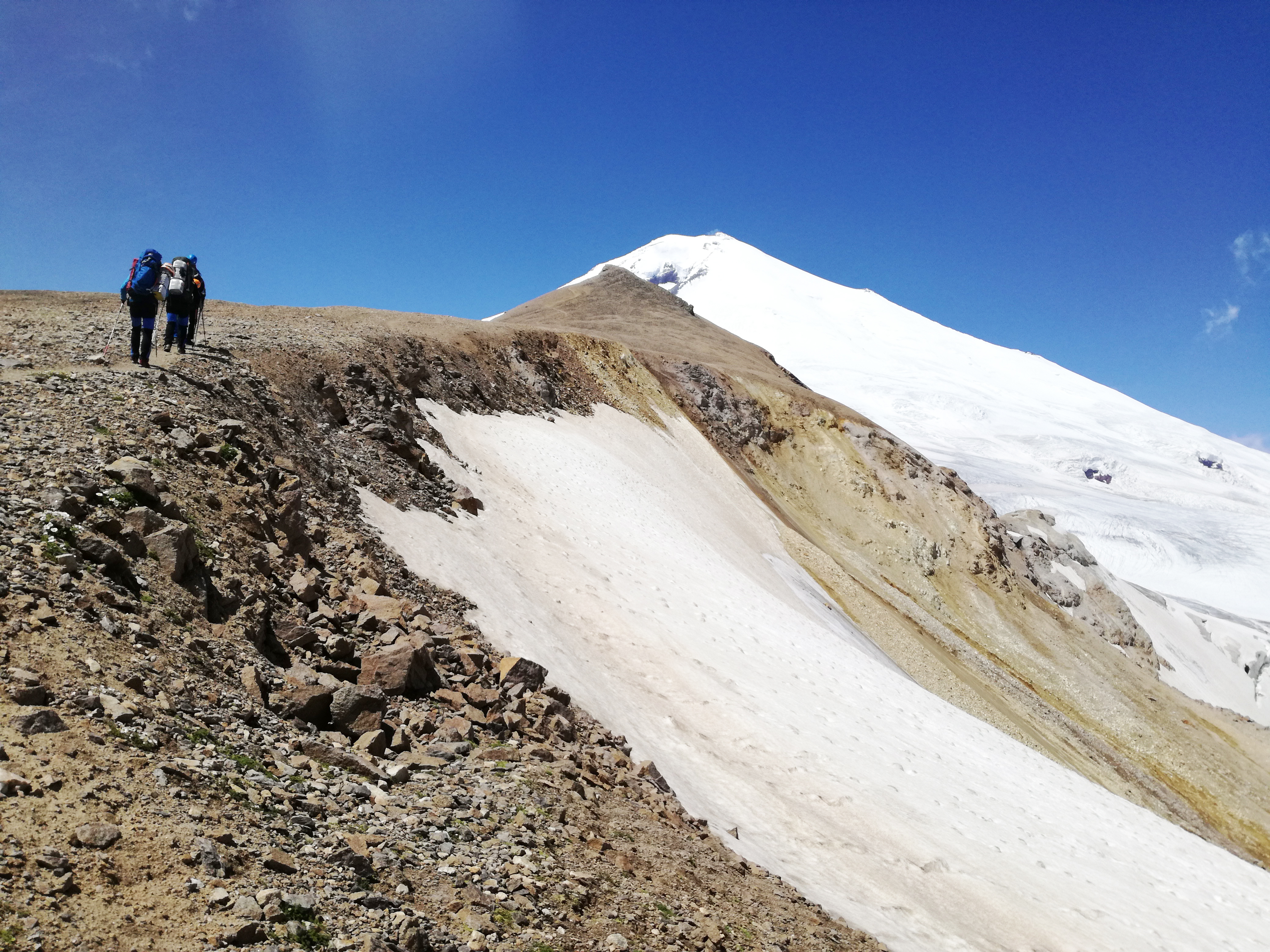 We put on our crampons and beat the last 100 elevation metres to the bivouac. There was only one suitable place there. I dug the other one for our tent together with Nývlt and arranged the stones. The weather forecast was even worse than it had been. We built our tent and properly anchored it to the stones. We expected strong wind with strong gusts. It did not look like that so far. Nývlt's breakfast didn't do him very well.  He felt strange and he had a queasy stomach. The others were OK. We could hear water under the ice behind our tents. Honza dug it with his ice-axe to make sure we had fresh water supply. Most of all, there was plenty of it. The whole lava flow was a permafrost, i.e. permanently frozen ground. Even the plateau clearing had cost us a lot of effort. 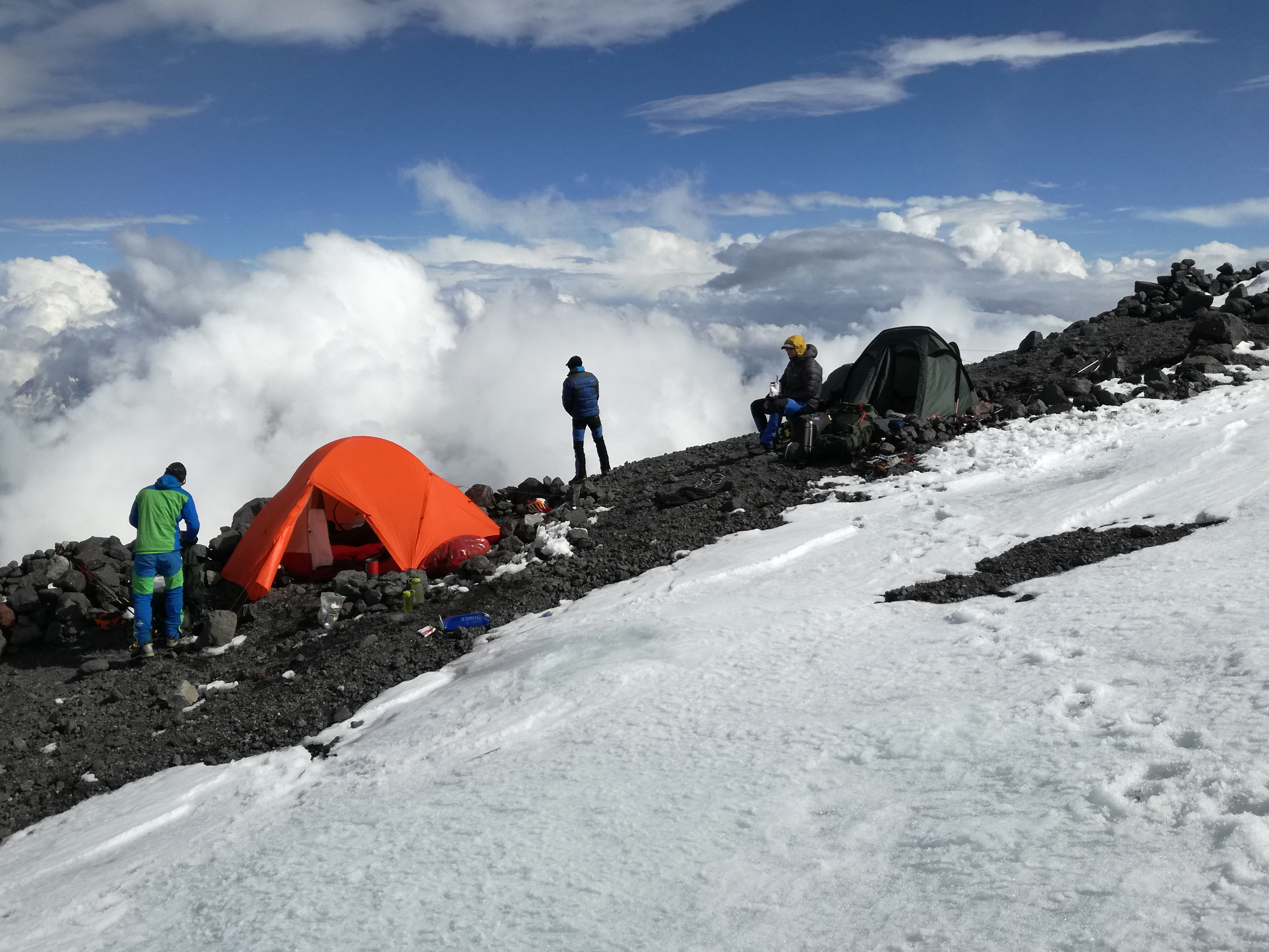 The clouds gathered and the sun set. Suddenly, as if someone had plugged some appliance into a socket or snapped their fingers, the wind started to blow. A lot. The clouds rolled above us. We crawled into our tents. We put our iron equipment outside the tents, to avoid getting struck by lightning. The storm came. There was a snowstorm, the wind was shaking the tents. After two hours the snow stopped and the wind velocity increased. The dark and biting cold slowly arrived. Martin's condition got no better; later, it even got worse. We set the alarm clock to 11:00 P.M. I got out of my sleeping bag and tent into the freezing cold. The meeting was in the boys' tent, as it was bigger. We still couldn't connect to the network. There had been no signal for 3 days. It was possible to connect for a while only and the Russian operator quickly broke the connection. Sometimes it was enough to send or receive a text message. We also used it to find out about the current weather forecast. We waited.

We had another meeting at midnight. We set the alarm clock to 2.00 A.M. And once more. The wind tore the boys' tent. I could hear them anchoring and tensioning the ropes in the night. At 4 A.M., we received the latest weather forecast. There would be several hours of unchanged weather. The wind was blowing like hell, the sky was clear, the temperature was below zero and the stream behind our tents was frozen to the ground. We held the last meeting. Nývlt was sick and had to go down. Down...that meant walking down the lava stream, crossing the glacier and continuing further 17 km down with heavy rucksacks and the descent of 3,300 elevation metres. The terrain was difficult - debris, snow and mountain tracks under that. Quite cool.

The agreement was that Hasák and Mirek would accompany Nývlt down to help him across the glacier. Hasák had offered that on his own, to compensate the last return as we had had to turn back because of him. Mirek was not independent. I and Honza continued to the summit at 7 A.M. We packed up everything we needed for bivouacking on the way if the weather got much worse. There was no one on the mountain and it was like glass. 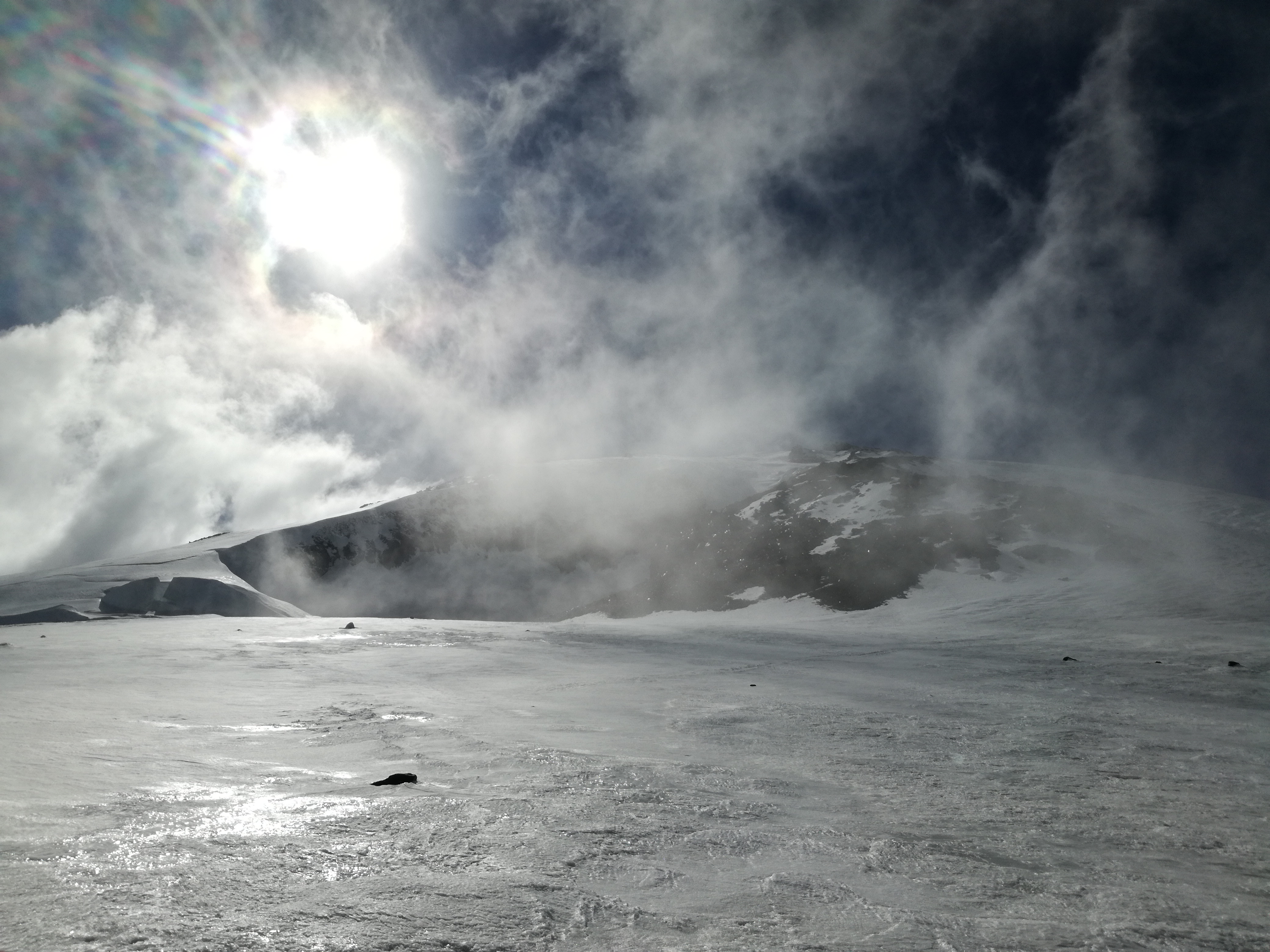 We put on the crampons. We needed to be quick. We left the ice-axes on our rucksacks. We walked with the poles with no rope to secure us. The route was good, frozen. In the meantime, the boys had turned into small dots hopping across the frozen firn fields next to the lava flow. It was the last time we saw them. We were a bit off the wind. I was wearing skiing glasses all the time and the sky was clear. The moments without people were fantastic. I was really enjoying myself. In some sections, we climbed at an angle of 70+°. We still walked with the poles. We also took advantage of the debris. The crater was stunning. There was only the final section past the summit rocks and the slope got less steep. The view of the glaciers and peaks around was stunning. There was 2.5 km of frozen ski slope below us.

I forced myself to stop thinking about slipping and we went on. Honza started feeling dizzy, his vision was blurred and he was a bit confused. I stuffed him with 2 Snickers bars and he was OK. I thought I had one more, but I didn't. It was exactly the right time for the bag with treats from the Magic grandpa. The slope got less steep and the area between us and the summit looked like an endless meadow climbing up the hill. It was rolling and it always looked as if we were nearly there. We climbed up the ridge. The wind tore off my glasses. Luckily, I managed to catch them. At the last 200 metres, it was my turn to feel exhausted. I had to take off my rucksack to find my emergency energy gel. 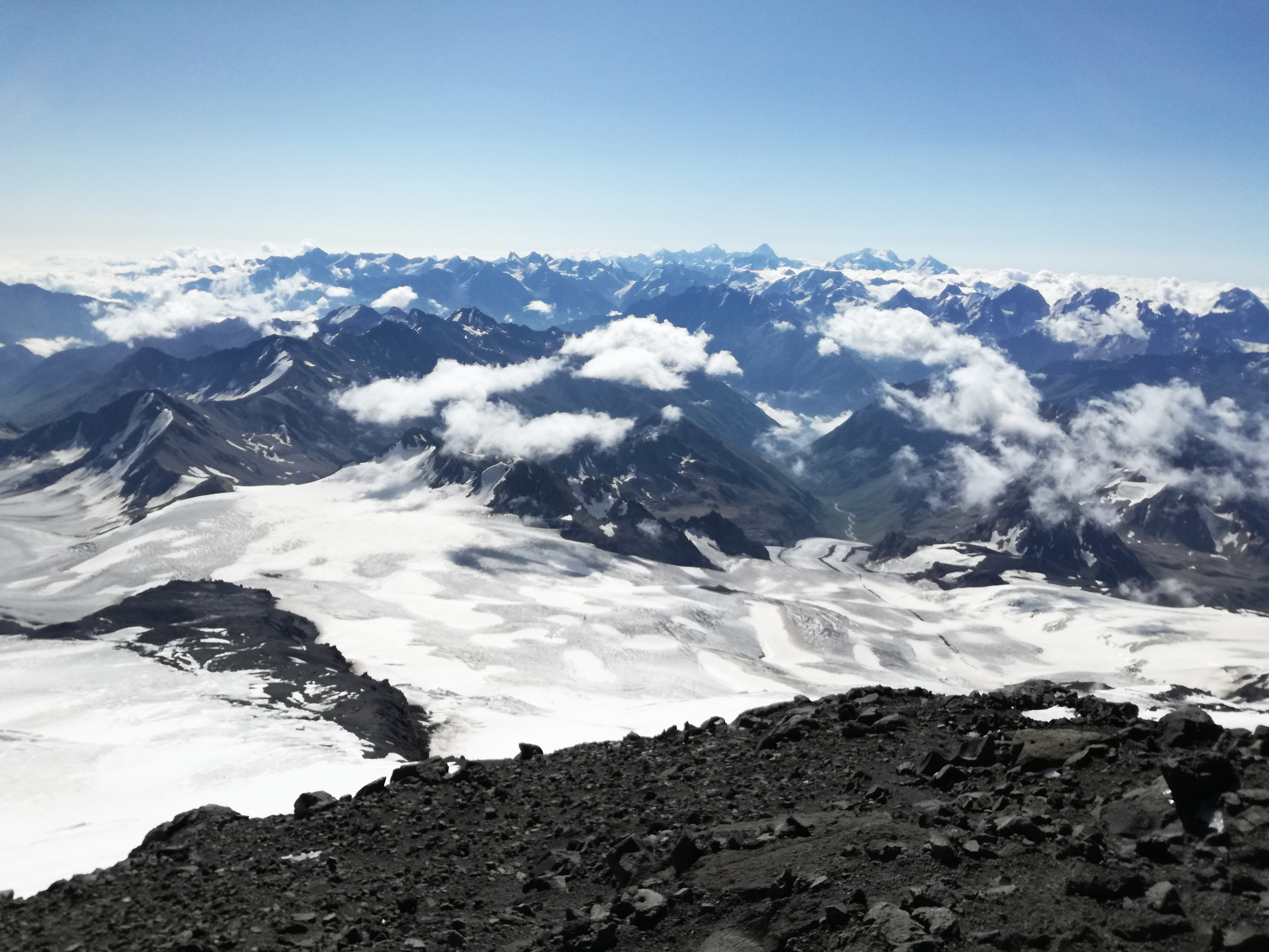 Finally, at about 1 P.M., we reached the summit. Nobody to be seen. Clear sky and terrible wind. We didn't waste our time there and rushed down to the gap between the Elbrus summits where we joined the normal route to the top. We followed it down to the cable car station. The descent along the normal route was incredibly boring on a beaten track and later through wet firn. At least we could slide down, regardless of the crampons. That was the only advantage. 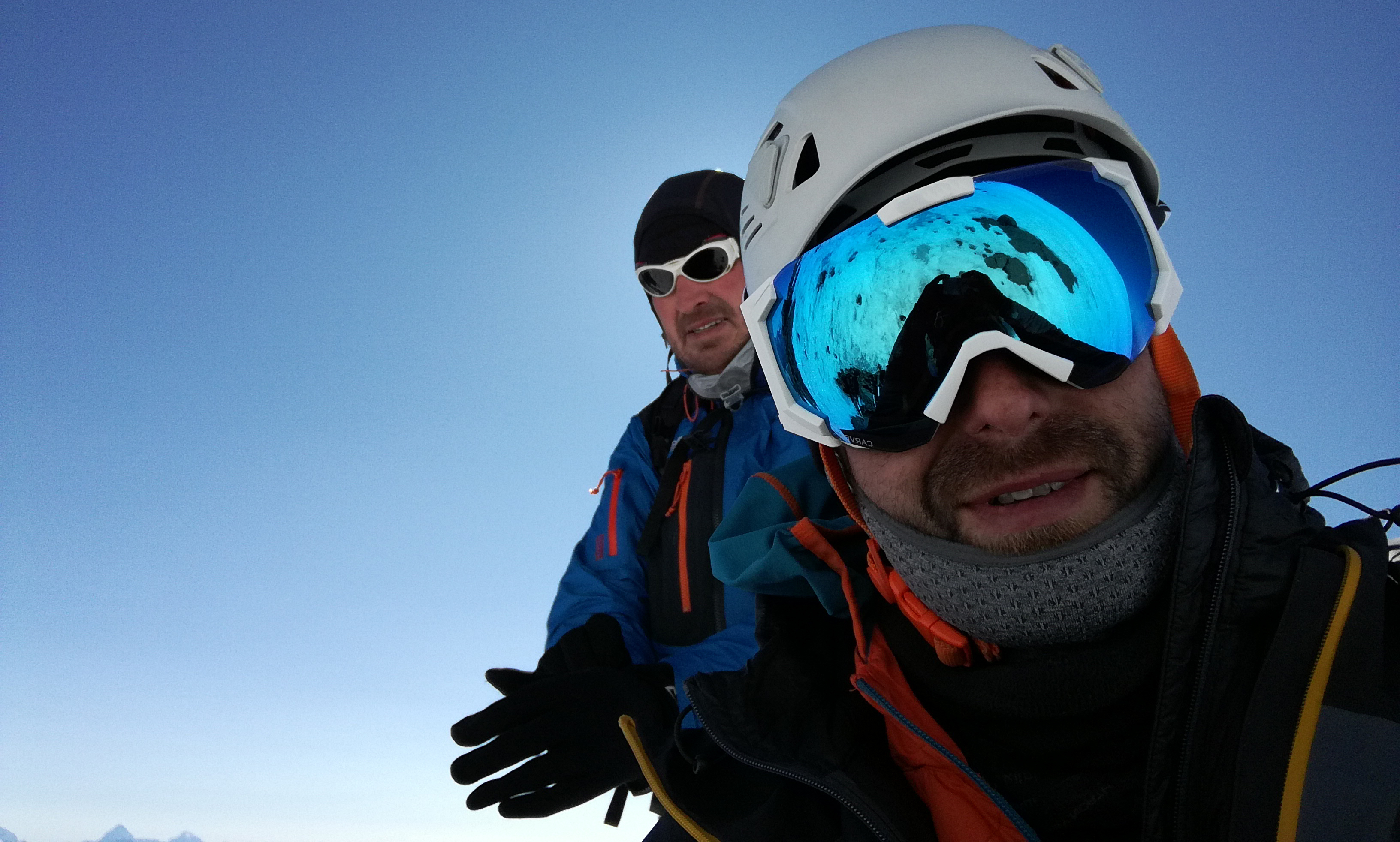 We reached the cable car station at 4:15 P.M. It was already closed. We tried to persuade the operator. He helped us buy tickets for 600 r for both of us and we took a ride to the station below. From there, the cable car operators let us ride down for free. We probably looked quite used. At the bottom station, we took a taxi and went to Sakliya. We sat down and had a beer. We waited for the boys. We arranged with Osman that he would pick them up in the "Garage". We got together in the camp. We drank a few shots to celebrate our success and talked about what had happened during the day. We had to pack up and at 11 P.M., we drove to Mineralnye Vody and flew via Istanbul to Prague. Ludmila made us a beautiful and filling farewell dinner. Soup, eggs and vegetables, home-made cheese, bread and a bottle of vodka.

All in all, we managed a beautiful crossing of the East Summit of Elbrus at the elevation of 5,621 m with heavy rucksacks.

Thanks, guys, see you in the mountains soon.

HAIL TO THE MOUNTAINS!